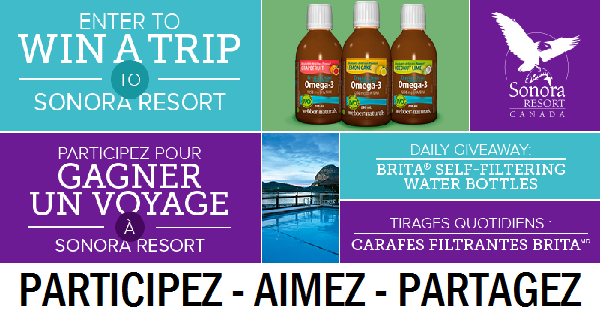 NO PURCHASE OR PAYMENT IS NECESSARY TO ENTER OR WIN THIS CONTEST. A PURCHASE WILL NOT INCREASE YOUR CHANCES OF WINNING.

ODDS OF WINNING WILL DEPEND ON THE TOTAL NUMBER OF ENTRIES RECEIVED. VOID WHERE PROHIBITED BY LAW. GRAND PRIZE WINNERS WILL BE REQUIRED TO SIGN DECLARATION OF ELIGIBILITY AND ENTER INTO A RELEASE OF LIABILITY.

This Contest is in no way sponsored, endorsed, or administered by, or associated with, Facebook.

BY ENTERING THE CONTEST, YOU UNCONDITIONALLY AND IRREVOCABLY AGREE TO BE BOUND BY THESE RULES, WHICH ARE A CONTRACT, SO READ THEM CAREFULLY BEFORE ENTERING. AMONG OTHER THINGS, THIS CONTRACT INCLUDES A LIMITATION OF YOUR LEGAL RIGHTS AND REMEDIES.

This Contest is open to all persons residing in all of the provinces and territories of Canada and all of the states in the United States of America (except residents of Florida, New York, and Rhode Island, where the Contest is void), who have reached the age of majority in their state, province, or territory of residence as of the first day of the Contest Period. WN Pharmaceuticals Ltd. (the “Sponsor”), the independent judging organization appointed by the Sponsor (the “Judge”) and each of their respective affiliates, franchisees, subsidiaries, advertising, and promotional agencies are collectively referred to herein as the “Contest Entities”. Employees of the Contest Entities and each of their immediate family members and/or those persons living in the same household (whether legally related or not) are all ineligible to enter or win the Contest. The Contest is subject to all applicable federal, provincial, state, and municipal laws.

Contest entrants acknowledge and agree that they are providing information directly to the Sponsor and agree to release the Contest Entities from any and all liability arising in connection with the Contest including without limitation any injury, loss, or liability of any kind with respect to, or resulting from the development, participation in, and execution of the Contest.

The Contest closes at 11:59:59 pm Eastern Time (“ET”) on June 30, 2016. To enter, fill out an online entry form provided on the webber naturals official website (http://www.webbernaturals.com) or on the webber naturals official Facebook page (https://www.facebook.com/webbernaturals) between 12:00:00 am ET on April 1, 2016 and 11:59:59 pm ET on June 30, 2016 (the “Contest Period”) and your entry will be included in the prize draw for the Grand Prize that will take place at the end of the Contest Period and for each weekday draw for Secondary Prizes until and if you win a Secondary Prize. NO PURCHASE IS NECESSARY to enter or win any prize in the Contest. A maximum of one (1) entry per person per day may be submitted.

There is one (1) grand prize (“Grand Prize”) and sixty-five (65) secondary prizes (“Secondary Prizes”) available to be won for the Contest.

•       Gourmet meals and beverages during your stay at the resort

•       Five-hundred Canadian dollars ($500.00 CAD) credit with Sonora Resort Canada to be used toward the purchase of additional resort activities or services, gifts from gift shop, or upgrades to wines/liquors provided

Additional expenses that are not included in the Grand Prize include, but are not limited to, ground transportation (other than the round trip transfers expressly referenced above), flight connections, departure or airport taxes, meals, beverages, room service, gratuities, taxes, insurance, travel and medical insurance and expenses, duties, levies, visas, passports, and health documents required by law, excess baggage costs, personal expenses, car rentals, gas, car insurance, items of a personal nature and all other expenses not specifically included above as part of the Grand Prize package and are the sole responsibility of the Grand Prize Winner and/or his/her Accompanying Travel Guest.

The Grand Prize Winner and his/her Accompanying Travel Guest must comply with all applicable laws, including, but not limited to, all local laws while in Canada.

By entering this Contest and accepting the Grand Prize, the winner agrees to maintain his/her behaviour and that of his/her Accompanying Travel Guest in accordance with all applicable laws and generally accepted social practices in connection with their participation in any Contest or Grand Prize-related activity. The Grand Prize winner understands and agrees that the Sponsor and/or Sonora Lodge Canada has the right, in their sole discretion, to disqualify and remove the winner and/or his/her Accompanying Travel Guest from any activity at any time if the winner’s or his/her Accompanying Travel Guest’s behaviour is uncooperative, disruptive, or may or does cause damage to person, property, or the reputation of the Sponsor and/or Sonora Lodge Canada or otherwise violates the policies of the Sponsor and/or Sonora Lodge Canada.

Grand Prize trip departure will be from the International Airport that is nearest to the principal residence of the Grand Prize Winner. Once an Accompanying Travel Guest is selected by a Grand Prize winner, such guest may not be substituted, except in Sponsor’s sole and absolute discretion. The Grand Prize travel dates are subject to seat and resort availability.

The Grand Prize Winner and his/her Accompanying Travel Guest must be Canadian or American residents to qualify for the Grand Prize.

No extensions of time will be permitted and the Grand Prize cannot be exchanged, transferred or substituted for cash except that Prize Provider reserves the right to offer a comparable product in the event of a vacation package cancellation, Act of God, or other unforeseen circumstances. The Grand Prize Winner will not be entitled to receive, in cash, certificate or otherwise, the balance of any amount representing the difference between the estimated retail value of the Grand Prize and the actual cost. No frequent flyer or other loyalty program miles will be awarded for travel that is part of the Grand Prize.

The total approximate retail value of all prizes to be awarded in this Contest is eight thousand, nine hundred and ninety-nine dollars and thirty-five cents[A1]  in Canadian dollars ($8,999.35 CDN); broken down as follows:

The approximate retail value of each Grand Prize stated above is based on a Vancouver departure, though the actual amount will vary according to the location of the airport from which the Grand Prize Winner departs.

Additional Details Applicable to Both the Grand Prize and Secondary Prizes:

Sponsor is not responsible for and winner will not receive the difference between the actual value of a prize at the time of award and the stated prize value in these rules or in any Contest-related correspondence or materials. No transfers, cash redemptions, or prize substitutes will be awarded or honoured. If a prize winner does not accept or use the entire prize awarded to him/her, the unaccepted or unused part of the prize will be forfeited and Sponsor will have no further obligation to the winner with respect to that prize or portion of the prize.

The odds of winning a prize depend on the total number of eligible entries received.

A random draw to determine each week’s Secondary Prize winners consisting of one (1) winner per weekday will be made at the end of each week of the Contest Period by the Judge. A weekday is defined as any day of the week that is neither Saturday nor Sunday.

A random draw will be made for the Grand Prize by the Judge on or about July 6, 2016.

Contest results and/or a copy of these Official Rules may be obtained by sending a self-addressed, stamped envelope to: Webber naturals ATTN: Customer Service Dept. 2000 Brigantine Drive, Coquitlam, BC V3K 7B5, Canada.

BY ENTERING THE CONTEST, EACH ENTRANT HEREBY EXPRESSLY RELEASES EACH OF THE CONTEST ENTITIES, FACEBOOK, AND EACH OF THEIR RESPECTIVE DIRECTORS, OFFICERS, EMPLOYEES, AGENTS, REPRESENTATIVES AND CONTRACTORS AND EACH OF THEIR RESPECTIVE SUCCESSORS AND ASSIGNS (COLLECTIVELY THE “RELEASEES”) FROM ANY AND ALL DAMAGE, COST LOSS, EXPENSE AND LIABILITY SUFFERED OR INCURRED BY THE ENTRANT ARISING FROM THE ENTRANT’S PARTICIPATION IN THE CONTEST (AND IF THE ENTRANT IS THE GRAND PRIZE WINNER, FROM ENTRANT’S PARTICIPATION IN THE GRAND PRIZE TRIP, INCLUDING ANY RELATED ACTIVITIES) INCLUDING PERSONAL INJURY, ILLNESS, DEATH, OR DAMAGE TO OR LOSS OF PROPERTY. NOTWITHSTANDING ANYTHING TO THE CONTRARY HEREIN, IN NO EVENT WILL THE RELEASEES BE LIABLE TO A GRAND PRIZE WINNER OR TO ANY ACCOMPANYING TRAVEL GUEST FOR ANY INDIRECT, INCIDENTAL, CONSEQUENTIAL OR PUNITIVE DAMAGES, INCLUDING DAMAGES FOR PURE ECONOMIC LOSS, AND IN NO EVENT WILL THE TOTAL AGGREGATE LIABILITY OF THE RELEASEES TO ANY GRAND PRIZE WINNER OR TO ANY ACCOMPANYING TRAVEL GUEST EXCEED THE LESSER OF: (I) THE DIRECT DAMAGES SUFFERED OR INCURRED BY SUCH PERSON; OR (II) THE SUM OF ONE HUNDRED CANADIAN DOLLARS ($100.00 CDN), REGARDLESS OF THE CAUSE OF ACTION, INCLUDING CONTRACT (INCLUDING FUNDAMENTAL BREACH), TORT (INCLUDING NEGLIGENCE) OR STRICT LIABILITY. IF THE ACCOMPAYNING TRAVEL GUEST HAS NOT REACHED THE AGE OF MAJORITY IN HIS/HER STATE, PROVINCE OR TERRITORY, THE GRAND PRIZE WINNER ASSUMES FULL RESPONSIBILITY FOR ANY ACCOMPAYNING TRAVEL GUEST WHO IS A MINOR.