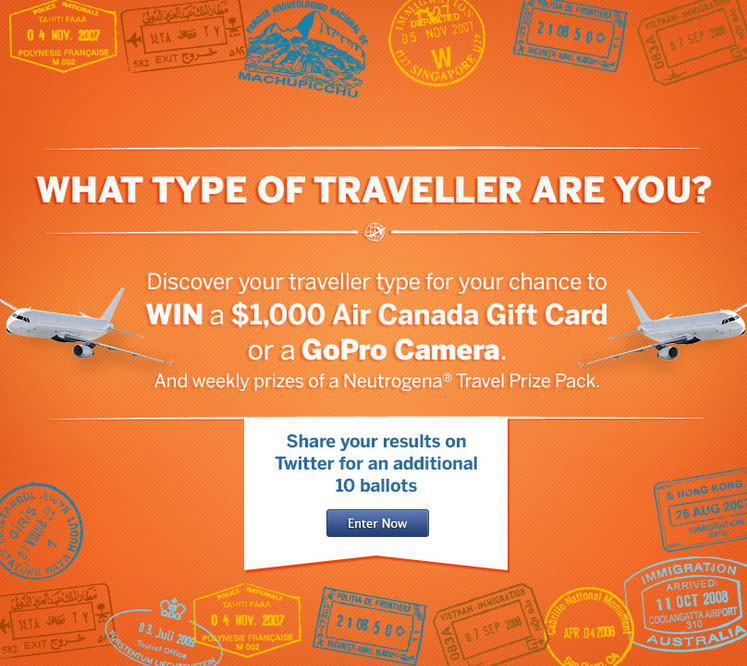 One (1) Second Grand Prize consisting of a GoPro camera with an ARV of $379.99 (CDN) will be awarded to the entrant drawn in the Second Grand Prize draw for the DUKORAL® Canada Facebook page “What Kind Of Traveller Are You” Quiz.

Six (6) Weekly Prizes, each consisting of one (1) $100 Neutrogena® travel pack will be awarded to the entrants drawn in each Weekly Prize draw of the DUKORAL® Canada Facebook page “What Kind Of Traveller Are You” Quiz.

The DUKORAL® “What kind of traveller are you?” contest (the “contest”)

The contest has two (2) parts.

Part 1: (“Quiz Round”). Contest entrants complete the “What kind of traveller are you?” quiz on the DUKORAL® Canada Facebook page.

Part 2: (“Ballot Round”). All quiz entries that comply with these contest rules (“Rules”) will be eligible for ballot counting. The quiz will contain six (6) questions with visuals to pick from as answers. There are two (2) Grand Prizes available to be won: i) first Grand Prize consists of one (1) $1000 Air Canada Gift Card and ii) second Grand Prize consists of one (1) GoPro camera with an approximate retail value (“ARV”) of $379.99 (CDN). The Grand Prize draws are on 11/24/2014 and all entries received will be submitted to these draws. The person who wins the first Grand Prize will not be eligible for the second Grand Prize. If they are drawn, their draw will not count and another winner will be drawn. Prior to the Grand Prize draws there will be six (6) Weekly Prize draws for $100 Neutrogena® travel packs (each a “Weekly Prize”). Entrants are eligible to qualify to win one (1) Weekly Prize and/or one (1) Grand Prize.

2. No Purchase Necessary. How to Enter.

To participate in the contest, visit www.facebook.com/Dukoral (“Contest Website”), and complete the quiz, which becomes your entry into the Contest. In addition to completing the quiz, you must include your full name, province of residence and a valid e-mail address. Your email will only be used to contact you if your name is drawn for a prize.

The contest is open to legal residents of Canada who have reached the age of majority* in their province or territory of residence as of the contest start date (see rule 4). The contest is not open to employees and those domiciled with employees of Crucell Vaccines Canada, a division of Janssen Inc. (the “Sponsor”), Brightworks Interactive Inc. (the “Administrator”) or any of their respective parent, subsidiary or affiliated companies, licensees, advertising and promotional agencies ("Related Parties"). The Sponsor reserves the right to verify the age of potential prize winners and that such persons are not employees (or domiciled with employees) of any related parties.

After an entrant is successful in a prize draw (see rule 5) the Sponsor will review their eligibility (see rule 9).

All qualifying entries that comply with the Rules will be eligible for the Ballot Round.

The Ballot Round will consist of six (6) weekly draws (one (1) per Weekly Prize) and are as follows:

PLEASE NOTE: Non-winning Entries will not be carried over into the Draw for the following Round. Once an entrant is drawn for a Weekly Prize and confirmed a winner (see rule 9), they cannot be drawn for another Weekly Prize but they can be drawn for ONE of the Grand Prizes at 10 am EST November 24, 2014.

Upon entering the Contest, you will have the opportunity of receiving ten (10) additional entries into the Grand Prize draws by sharing your results on your Twitter account using the hashtag #DukoralContest. There is a Limit of ten (10) additional entries per person into the Grand Prize draws during the Contest Period. Anyone found to be using multiple accounts to enter will be ineligible. Use of any automated system to enter or otherwise participate in this Contest is prohibited and will automatically result in disqualification. In the event that an entrant tweets inappropriate content or retweets, he or she will be disqualified. Entrants are subject to Twitter's terms, conditions and rules. The Sponsor is not responsible in any way for any decisions Twitter makes regarding the entrant's account with Twitter.

One (1) Second Grand Prize consisting of a GoPro camera with an ARV of $379.99 (CDN) will be awarded to the entrant drawn in the Second Grand Prize draw for the DUKORAL® Canada Facebook page “What Kind Of Traveller Are You” Quiz.

Six (6) Weekly Prizes, each consisting of one (1) $100 Neutrogena® travel pack will be awarded to the entrants drawn in each Weekly Prize draw of the DUKORAL® Canada Facebook page “What Kind Of Traveller Are You” Quiz.

The prizes will be delivered by the Sponsor to the confirmed winners by courier within four (4) weeks of their being confirmed a winner, must be accepted as awarded and cannot be transferred or substituted. Sponsor reserves the right to substitute a prize of equal or greater value if a prize cannot be awarded for any reason. Odds of winning depend on the total number of entries received.

(c) The Sponsor reserves the right to use the following in association with the selected entrants, without compensation or permission, except where prohibited by law, in any advertising and publicity, including in relation to the contest or DUKORAL®, in any media throughout the world (including any official DUKORAL® web site) in perpetuity; the name, city of residence, comments, likeness and/or photograph of any entrant selected to win a prize.

(d) The Sponsor shall not be liable for lost, late, incomplete, misdirected, not received, stolen, mutilated, or illegible entries. By entering this contest, entrants accept and agree to be bound by these rules and the decisions of the Sponsor which are final, binding and conclusive on all matters relating to this contest. All entries become the property of the Sponsor, none will be returned and no correspondence will be entered into, except with selected entrants who will be notified by e-mail. This contest is subject to all applicable federal, provincial/territorial and municipal legislation. The Sponsor shall not be responsible for any failure of the Contest Website or any wireless network failure during the contest or for any problems or technical malfunction of a telephone network or lines, computer on-line systems, servers, access providers, computer equipment, software, failure of any e-mail, on- line, or Internet entry to be received by the Sponsor and Administrator. In addition, the Sponsor shall not be responsible for problems due to technical problems, traffic congestion on the Internet or at any website or wireless network, or any combination thereof including any injury or damage to an entrant's or any other person's computer, or property related to or resulting from playing or downloading any material in the contest. Any attempt to deliberately damage any website or to undermine the legitimate operation of this contest is a violation of criminal and civil laws, and should such an attempt be made, the Sponsor reserves the right to seek remedies and damages to the fullest extent permitted by law, including criminal prosecution. Entries are subject to verification and will be declared invalid if they are illegible, incomplete, mechanically reproduced, mutilated, forged, falsified, altered or tampered with in any way.

9. To be Confirmed a Winner.

To be confirmed a winner of a prize, each selected entrant must (i) answer correctly, without assistance of any kind, whether mechanical or otherwise, a time-limited, mathematical skill-testing question to be administered by mail or email at a mutually convenient time and (ii) sign and return within the time indicated to them: (a) a Prize Acknowledgement Form, which includes a standard declaration of compliance with the Rules and a release (including publicity and copyright release and waiver of moral rights); and (b) any other document specified under these Rules. If a document is not completed, signed and returned within the time specified, or if a selected entrant cannot be contacted or has not responded within one (1) week of the date when contact was first attempted, or if the mathematical skill-testing question is answered incorrectly, or if a selected entrant does not comply with the Rules, the selected entrant is disqualified and will not receive a prize and another entrant may be selected in accordance with the Rules.

By entering this contest, each entrant agrees to be bound by these Rules and the decisions of the Sponsor, which are final and binding on all entrants and may not be challenged in any way. The Sponsor reserves the right to disqualify any entry or entrant that (1) contains or has supplied untruthful, incomplete, inaccurate, inappropriate or misleading information or information/material that is otherwise non-compliant with the Rules; or (2) is attempting to undermine the legitimate operation of the contest or is otherwise engaging in unfair, inappropriate or objectionable practices. The Sponsor reserves the right, at its sole discretion, to disclose any entries to law enforcement.

By entering this contest, each entrant agrees and acknowledges that the Sponsor, and each of its affiliates, divisions, subsidiaries and advertising and promotion agencies, and each of their respective employees, officers, shareholders, representatives, directors and agents (collectively “Releasees”) are not responsible for and shall not be liable for: (i) late, lost, delayed, misdirected, mutilated, incomplete, unreadable, inaccurate or unintelligible entries; (ii) any notification that is lost or not received by an entrant selected to win a prize; (iii) any injury or other damage to person or property of any kind or any other liability, which may be related to the contest for a prize; and (iv) any inability to participate in the contest due to any technical or other failure.

13. For Quebec residents only:

The winners’ names may be obtained by sending a request with a self-addressed stamped envelope to “DUKORAL® “What Type Of Traveller Are You?” Quiz contest – Winners’ Report”, c/o Brightworks Interactive, 100 Broadview Ave. Suite 200, Toronto, ON M4M 3H3, until November 25, 2014.

FACEBOOK is a registered trade-mark of Facebook, Inc., which is not in any way affiliated with the contest.