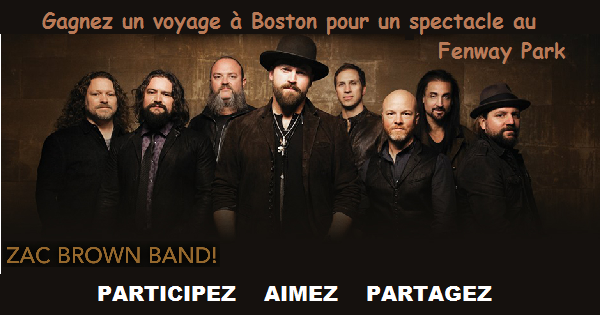 (i) round-trip economy airfare for the Winner and his/her guest leaving together at the same time and from the same gateway from the Canadian International airport closest to the Winner’s home (Vancouver, Edmonton, Calgary, Regina, Winnipeg, Toronto, Ottawa, Montreal, Halifax or St. John’s) to Boston, Massachusetts, USA (the “Trip”);

(ii) two (2) nights standard hotel accommodation to be selected by Sponsors in their sole discretion for the Winner and his/her guest based on double occupancy; and

(iii) two (2) admission tickets to the Zac Brown Band performance taking place on August 9, 2015 at Fenway Park in Boston, Massachusetts; and
(iv) one (1) CD copy of “Jekyll and Hyde” by Zac Brown Band.

(b) The Prize has an approximate value of Three Thousand Dollars (CDN $3,000.00). The actual value of the Prize will depend on departure city.

(c) The Winner is not entitled to monetary difference between actual Prize value and stated approximate Prize value, if any.

(d) The Prize will be distributed within two (2) days after the Winner has been successfully contacted and notified of his/her Prize and fulfilled the requirements set out herein. The Prize must be claimed within thirty (30) business days of notification of being selected as a Winner. Failure to claim the Prize within the allotted time period may result in your disqualification and forfeiture of all rights to the Prize (in the Sponsor’s sole discretion).

(e) The Winner and his/her guest must be available to travel from August 8, 2015 through August 10, 2015. Should the Winner and/or his/her guest be unable to travel on the dates and times designated by the Sponsors, the Prize may be forfeited and awarded to an alternate winner. The Winner and his/her guest will be responsible for (without limitation) transportation to and from any airport and/or bus terminal and/or train station (including originating and departing airport) , any local transportation costs, travel and medical insurance, travel documentation, airport improvement fees, taxes, gratuities, telephone calls, in-room charges, meals and alcoholic and non-alcoholic beverages and any other expense not explicitly included in the Prize.
Accéder à la page du concours